OSP is the abbreviation of (Organic Solderability Preservatives), which is translated as Organic Solderability Preservatives in Chinese, also known as Copper Protector, or Preflux in English. Its function is to block moisture, prevent oxidation of the pad, and maintain good solderability on the soldered copper surface. Due to the good surface flatness of OSP, high reliability of solder joints, relatively simple PCB manufacturing process and low cost, it has obvious advantages compared with other surface-treated PCBs, and is more and more popular in the industry. Under normal circumstances, OSP surface treatment PCB has good tin properties, such as improper PCB production process control or improper use of SMT control will lead to poor soldering problems. Based on the characteristics of the OSP surface treatment PCB and the case analysis of poor soldering, this article focuses on the analysis of the factors that affect the poor solderability of the PCB from the control of the OSP film thickness, PCB storage and SMT use, and proposes some corresponding improvement measures.

PCB is an indispensable material for modern electronic products. With the rapid development of surface mount technology (SMT) and integrated circuit (IC) technology, PCB needs to meet high density, high flatness, high reliability, smaller aperture, and smaller The development requirements of the pads, the requirements for PCB surface treatment and manufacturing environment are getting higher and higher. OSP surface treatment is a common PCB surface treatment technology at present. It is to chemically grow a 0.2~0.5um organic film on the clean bare copper surface. This film has anti-oxidation and resistance at room temperature. Thermal shock and moisture resistance can protect the copper surface from oxidation or sulfidation. In the subsequent high-temperature soldering, this protective film must be easily removed by the flux quickly, exposing a clean copper surface in a very short time Combine with molten solder to form a strong solder joint. Compared with other surface treatments, OSP surface treatment has the following advantages and disadvantages:

a. The OSP surface is flat and uniform, and the film thickness is 0.2~0.5um suitable for PCB with SMT close-pitch components;

b. OSP film has good thermal shock resistance, suitable for lead-free technology and single and double panel processing, and is compatible with any solder;

c. Water-soluble operation, the temperature can be controlled below 80 ℃, will not cause the problem of substrate bending and deformation;

e. The process is relatively simple, the yield is high, and the cost is low;

f. The disadvantage is that the formed protective film is extremely thin, and the OSP film is easily scratched (or scratched);

g. After many times of high-temperature soldering on the PCB, the OSP film (referring to the OSP film on the unsoldered pad) will undergo discoloration, cracking, thinning, and oxidation, which will affect the solderability and reliability;

h. There are many types of syrup formulas, different performances, and uneven quality.

In the actual production process, OSP boards are prone to problems such as surface discoloration, uneven film thickness, and excessive film thickness (too thick or too thin); in the later stages of PCB production, the formed PCB is easy to appear if stored and used improperly Soldering problems such as oxidation of pads, poor tin on the pads, inability to form strong solder joints, false soldering and insufficient solder; SMT production of double-sided boards and soldering on the second side of the tin furnace are prone to poor reflow soldering, solder joint leakage, The appearance cannot meet the IPC3 level standard, and the solder furnace soldering defect rate is high. 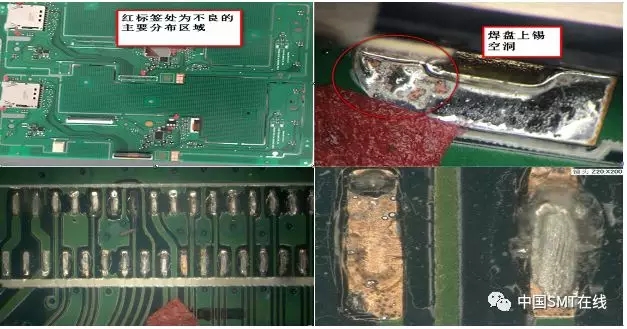 A company’s OSP surface-treated PCB product has good tin on the component pads on the first side of SMT production, and poor tin on the component pads of the connectors and some locations when the second side is produced. Solder appears on the pads. The anti-wetting and solder rejection problems are shown in Figure 1 below. The PCB in this case is an OSP surface treatment method, and the SMT process is a lead-free process. According to basic soldering principles and actual engineering experience analysis, the appearance of solder rejection and dewetting is directly related to the solderability of the PCB surface pads. Therefore, the analysis idea of this case is to first pass the visual inspection, then use isopropyl alcohol (IPA cleaning) and hydrochloric acid to clean the bad pads to compare the solderability, and then use the third-party laboratory to use EDS for composition analysis and other methods to find Find out the reasons for the poor solderability of OSP and give corresponding improvement measures.